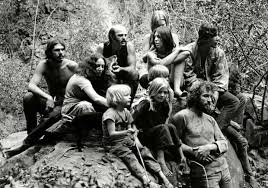 My friend argued that at archi-school we learn: it is noble and heroic to “struggle” and “starve” for our vocation; we learnt that we should never “sell-out” to the Money God; and we can only ever be validated through our own architectural integrity. In other words, as my esteemed friend noted, we are taught in architecture school, through the studio system, that the only thing that can validate our existence as individuals is our wonderful designs.

That’s ok if you have decent work or designs that will actually validate your existence. Hard to do if you only ever do bathroom renovations. Most architects seem to struggle to even get one great project designed and built.

Yes, I also drank that Kool-Aid at architecture school as well. I drank a lot of cultish Kool-Aid there. I suppose the first archi-cult I fell into at architecture school was the Aldo Rossi cult. I wanted to be in a car accident just like him. Then design a cemetery.  Then it was the Carlo Scarpa cult. I wanted to live half the year in Venice and the other half in Istanbul. Then, of course, the Corbusian cult. I wanted to start a practice in Chandigarh. For a while I was in love with Michael Graves and I wanted to draw classical figures on yellow trace just like him. I wanted to channel James Stirling and go live in the Florey building in Oxford. For a young architecture student from the outer suburbs, where the consumer consumption roller coaster reigned supreme, all of this Modern and Post-Modern architectural goulash was heady stuff.

At architecture school, I also fell in, as a follower, with a few of the local heroes. I followed around a few of these emerging architectural cult figures until they gave me a job. Then, usually, they sacked me. It was almost like every semester I was in a different studio cult. I was always so desperate to fit in.

The problem is that the norms and forms of cult behaviour ingrained into us as architects means that not only are we architects hopeless at money, but, we are also hopeless at management. As a profession, we need to get out of the ever diminishing and downward spiral of cult behaviour. It’s not healthy because most cults rely on charismatic, leaders, bizarre initiation rituals and secret circles of knowledge. Sounds like Architecture doesnt it?

Usually these cults favour those who will do whatever the cult leader says. These architectural cult leaders often take their cultish and bad behaviour into their firms. Maybe thats why architects are crap at management. Architects need to avoid the cultish behaviour. Because it is actually brutish behaviour. In your current studio, office or project team ask yourself the following questions:

Most architectural teams and studios (and even bigger organisations) will exhibit some of these tendencies to a degree. But, if there are too many of the boxes ticked in the above list, then you are possibly and most likely in cult territory.

Inevitably these cults implode, they are by their nature self-sabotaging, self-destruction of one kind or another, staff turnover is too high (costly), or things don’t get done properly (implementation issues). Usually, the architecture is actually not as good as it could have been with better less cultish management in place.

It is an easy thing to do. Being in a cult as you develop has its place but not forever you as you will end up like Gollum living in the shadow of some minor architectural cult leader

When I left architecture school no wonder I wanted to start my own cult. I wanted to be the cult leader rather than the follower. This of course, caused all sorts of problems. I think at the peak of my cult when I taught and was in practice I may have had, 6 and possibly 7, followers. I was on fire. Just like all good cult leaders.

According to my blog stats, and Google Analytics I now have a few more cult followers than suggested above.  So, thank you so much to all of you who follow this blog and watch out for the next blog which will come to you from London as I attend ARCOM 2017 in Cambridge.