In my city of Melbourne the apartments are coming. This has also is happened in other cities around the world but at the moment Melbourne is just about to reach “peak apartment.” It is an unprecedented development onslaught that will change the face and the character of the central city and the broader city of 4 million people. But will this onslaught of lowest common denominator design destroy Melbourne’s image as a great place to experience, do business and learn in? Will the apartment apocalypse destroy the image of the student friendly city?

The first problem that exists in approaching this question the lack of comprehensive, easily accessible and independent data. No one government institution or organisation independently collects and communicates aggregate data on these developments. Hence, the data describing the real situation needs to pieced together, compared and substantiated from a range different sources (A task obviously too much for this blogger).

Currently the sources about the apartment boom might include research and data available from: The ABS, the  Property Council , Melbourne City Council and of course the media including newspapers such as  The Age .

One reasonably reliable data source that appears to provide a good information is the the Urban Melbourne Project Database. This data gives a good overview of what is being currently being planned for and built. As of the date of this post Urban Melbourne states that within the Central City of Melbourne there are currently.

Urban Melbourne predicts that if only half of the projects in this pipeline are delivered this will in itself add 15,000 to 17,000 new CBD residents. The potential boost of all these projects is an extra 42,000 to 43,500 residents.

In contrast the Melbourne City Council states that there are 20,038 residents in Melbourne CBD represented which represents 21 per cent of the municipality’s overall population. Remember that the figures I am citing here are only for the central grid. They do not include the population or dwelling numbers for other zones or small areas in Melbourne City such as Southbank or Docklands. According to the MCC there were:

16,320 dwellings in Melbourne CBD representing around 28 per cent of the municipality, with residential apartments comprising 69% of all housing types in the small area Melbourne CBD’s population is forecast to reach around 52,000 by 2036; an increase of more than twice today’s population, living in around 27,500 households.

There are some disturbing trends in the demographics of the MCC statistics. Around two thirds of residents are in the 20 to 24 age group with a median personal weekly income of around $560. Median income is relatively low, median rents for individual properties are above these and the age demographic is under 30. Many of the residents are stduents and Mandarin speakers dominate. As this 2013 snapshot states “The most common workplace location for employed Melbourne CBD residents was within the Melbourne CBD small area (45%).”

Given these statistics it is not hard to imagine a city comprising an  underclass of service workers, or worse still “guest workers”, pursuing education opportunities in the city and funding this through part-time work. It is like the entire central city is becoming one big  7-11 which is adjunct to and servicing a very large office that employs workers from the dormitory suburbs.

There is more that could be written about the economics of the situation. But I will save that for a later blog.

As this process of densification takes place there are some notable design shockers both under construction and in the sales or planning pipeline.  But, there are some real shockers about to be built.Off the shelf curtain wall systems combined with a bit of branding are the worst offenders. A lack of consideration for wind effects and a disregard for urban scale and amenity at street level.I would be keen to see the fluid dynamics (wind) models for some of these new proposals.

All of this shabby development is obscured by the expert opinions, future technology, urban lifestyle, smart infrastructure chatfests and Ted talkie Linked-in Types (I should talk) types who grace out city. We are beset by gurus and a  week doesn’t go when there is a new guru trucked in proclaiming a bright new densified future for our city.  I think the first of the trucked-in-to-Melbourne Gurus Jan Gehl has a lot to answer for. Gehl’s slogans have been a mask to a city that is increasingly privatised and where civic and public space has been lost and is increasingly regulated and surveilled. Even Federation Square, with its compositional parti based on open field spatiality, in theory enabling a range of civic activities and “possibilities”, has easily facilitated, the capital flows through Melbourne’s machinic grid. The position of developers is evident in the debate over Fed Square East .

All of this suggest that we are witnessing a new phase of development and a property market driven largely by the Property Council advocates and developers. The housing market in the central city has been distorted at a number of levels. The debates over Negative gearing and the nature of capital inflows from elsewhere into the property market exemplify this. Inadequate planning governance in Victoria is another factor. It is appears easier to get a planning permit for a high rise building than a small internal renovation in the inner suburbs. Thirdly, a kind of “no policy” regime exists that always privileges the developer. You would think after the Docklands (and Fishermans bend) debacle that politicians and policy makers would exercise a greater rigour and toughness towards development.

Infrastructure also remains a real problem. At least the state government is building a new metro. But, where are the social services for the increase in central city population? Indeed, what services are needed ?

Being able to so easily characterise this current boom and its associated phenomena suggests that it is large scale property speculation and branding that is driving the boom in apartments in the central city. Where is the real vision for inner urban communities and affordable housing in all of this? Affordable housing that is social and sustainable and not 53 square meters on the 40th floor with an empty gym above a low ceiling carpark, some small biz retail, a coffee roasting  barista heaven; with a bit of wireless some bain-marie action and a sandwich toaster. The developers would say, what more could you want for in a city?

The “densification of the city”argument by sustainability academics has only led to unsustainable (replete with green star rated curtain walls)  and aesthetically horrific developments. In Australia, property markets are distorted and social housing reform is stuck. This is pretty much what happens when capitalist property development runs amok. As we all know after every boom there is a bust; Melbourne is now in that strange state just before the flow of capital seeks other markets.

We are entering a new, strange, surreal and distorted phase of city development in Melbourne. Despite the appearance of densification we are approaching, and driving, densification’s opposite condition: emptiness.  An emptiness epitomised by a city scrubbed clean with capital flows and the corresponding erasure of its history as a once great 19thC city. 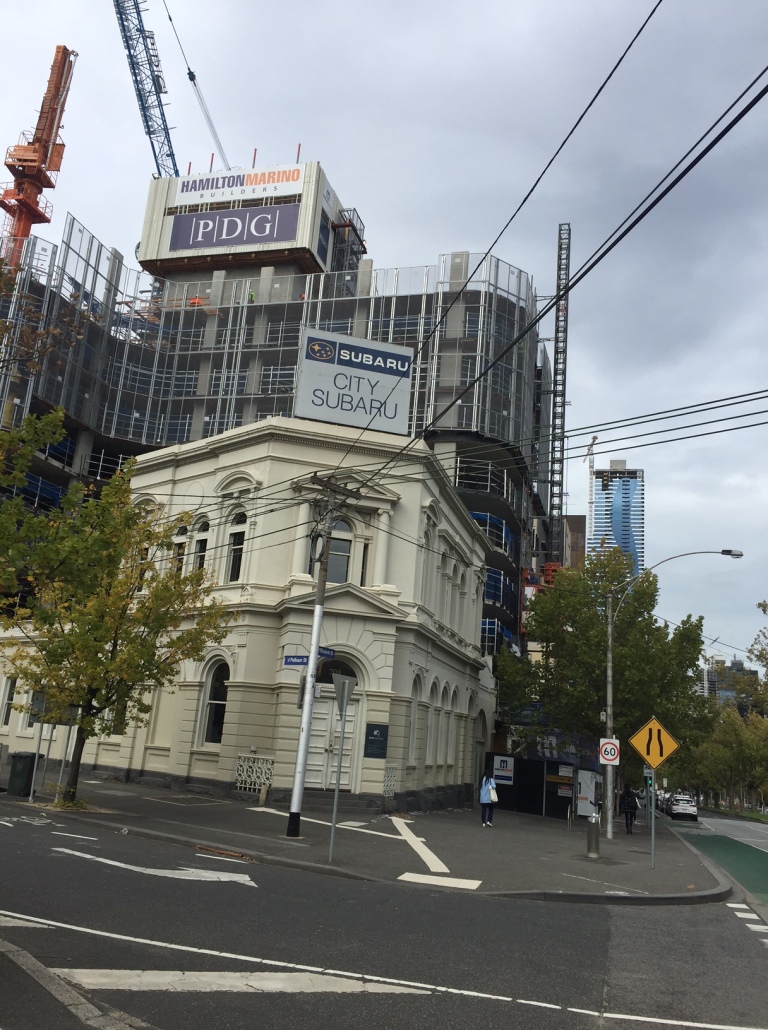 The culture, practice and business of architecture