The new Switch House extension at the Tate Modern museum attests to Herzog and de Meuron’s ability to propose a public architecture that need not be a mish mash of white walls and fully glazed open vistas. As the Observer art critic Laura Cumming noted the Switch House seems to go against the “dominant piety of modern public buildings that democracy = transparency = glass.” This dominant and simplistic piety seems to have infected much of contemporary architecture. As I have written elsewhere the house seems to have suffered the most from this kind of architectural pornography. In the public realm this dominant piety is certainly the public and civic architectural language most beloved by the neoliberal state. Everything is Richard Meier like these days. In some ways it is the final triumph of the architecture of the New York Five.

The new Switch House as an addition to the Tate Modern adds more gallery spaces, education and events facilities, staff facilities, a restaurant, members rooms and best of all a viewing deck across London. All of this sounds like a lot of extra space and prior to visiting the building I naively expected to see it organised around clever vertical circulation with large open and flexible floor plans. I naively expected a similar regime to that evident in the existing Tate Modern previously refurbished by the Swiss pair. The new extension is more intricate than this and its public spaces, and circulation routes exhibit a finer grain of detail that is not common in contemporary architecture. The internal circulation and public spaces are generously scaled and inflected by strange warp and weft of the concrete frame that supports the exterior brickwork.

Stairs are always a place of apprehension and darkness; often the back stairs are where the budget ran out or where the fire services are fully revealed or where you may never encounter others. In the Switch House stair system this a generosity of space, attention to material detail, views to the exterior, as well as view lines along and across the vertical circulation spaces to other adjoining spaces. There are a series of different promenades within the building, through the undercrofted old tank spaces, the heroic helical stair, vertical stairs, and outside the lifts and along the perimeter walls with glimpses of the outside world. This is a hollowed out pyramid with a palimpsest of interior spaces. In this theatre of spaces the silhouettes of both individuals and small groups seem momentarily freeze framed before they move on. 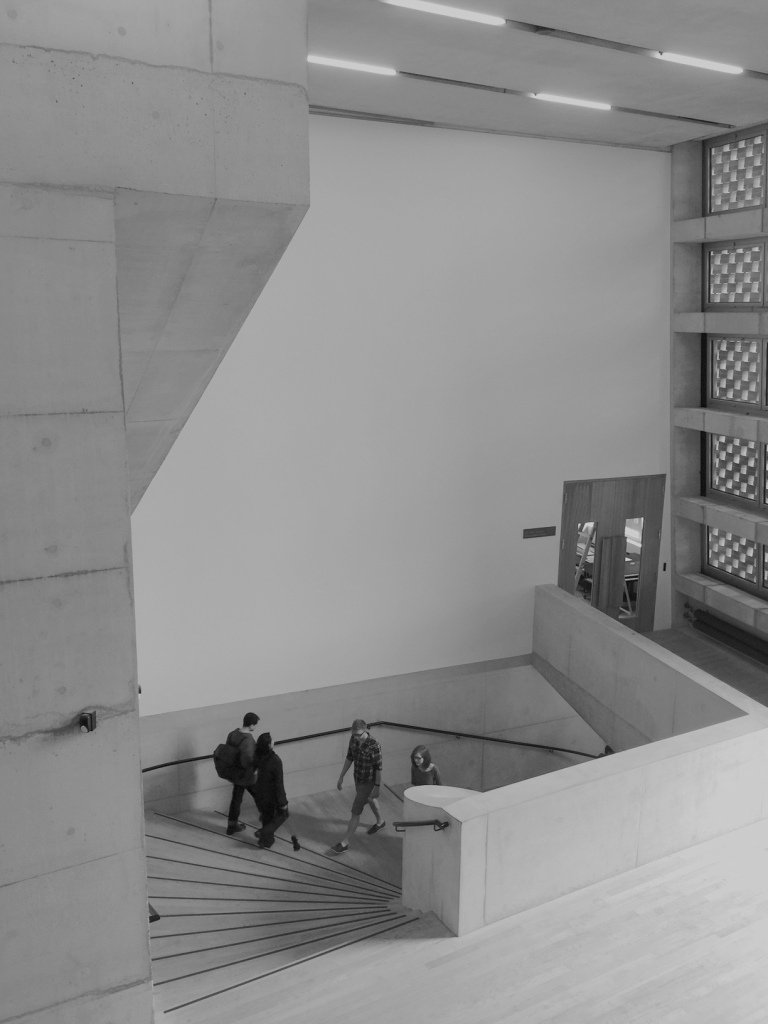 In some ways the antithesis of the Tate Modern’s turbine hall and galleries. In these one is subsumed by the monumental spaces of a now archaic industrial technology of Giles Gilbert Scott’s power station desperately designed not to overshadow Wren’s dome at St Paul’s. Where the 2000 Tate Modern is vast and cavernous and the surreal glimpses and dissonances of conceptual art can be taken at distance. Walking up and down this building one becomes enveloped in its spaces as a flaneur both of the architecture but also of the other people one can see and may encounter within the building. In other words Herzog and De Meuron have created a city within a city. The complexity of the circulation spaces seem like a version of Loos’s raumplan; the building is certainly more raumplan than free plan. The Switch House circulation reminds me of the vertical stair circulation at the back of the Muller House. The grain of the concrete in the Switch House also seems strangely like the interior cladding stone of Muller.

The Switch House is certainly more claustrophobic than the spaces of the turbine hall and there is a dissonance in the architecture with its odd juxtaposition of concrete columns, brick lattice grill work, and seemingly adhoc spaces which come into much closer confines with ones body. This is not a public palace that one can walk through easily as a god-like citizen of Rome or Athens, ala Richard Meier at the LA Getty, with the ease of knowing that the space itself is open and rich and luxurious and supported by a network of philanthropy. Herzog and de Meuron have created a series of spaces that are variegated in their lighting effects, a bit dingy in some ways, and perhaps more like being in the underworld of the enslaved Nibelung dwarves in Wagner’s Das Rheingold than being on the mountaintop. The Switch House is an fortress that has, through its sparse material treatments, had a kind of melancholy folded into it.

My own biases makes me think that the extension points to the architecture of Loos, the paintings of De Chirico or the subtle yet weird surrealism of Corbusier’s houses of the 1920s. Perhaps Herzog and De Meuron’s work is related to the Swiss artist Urs Fischer. In any case, this is an architecture that evokes notions of estrangement and the grotesque in minimalist forms. The geometric kink in the exterior of the building is both gargoyle and pyramid. After all, and despite its Renaissance pretensions, London is essentially a Gothic city.

There is a real treat on the viewing deck. The viewing deck is great because you get a 360 degree view of the City. The sense that you are in a public building is further emphasised by the fact that you can see directly into the neighbours houses in the unfortunate Neo Bankside development. It’s actually funny as these are the neighbours that happen to be part of Richistan, the nation where money is made, accumulated and distributed to the Caymans. It is this contrast that highlights the fact that the Switch House is to some degree a fortress of public space in a city where public and civic space, the space of encounter and possibility and freedom, has been largely destroyed by the bankers and more recently the celebrity politicians of the City. 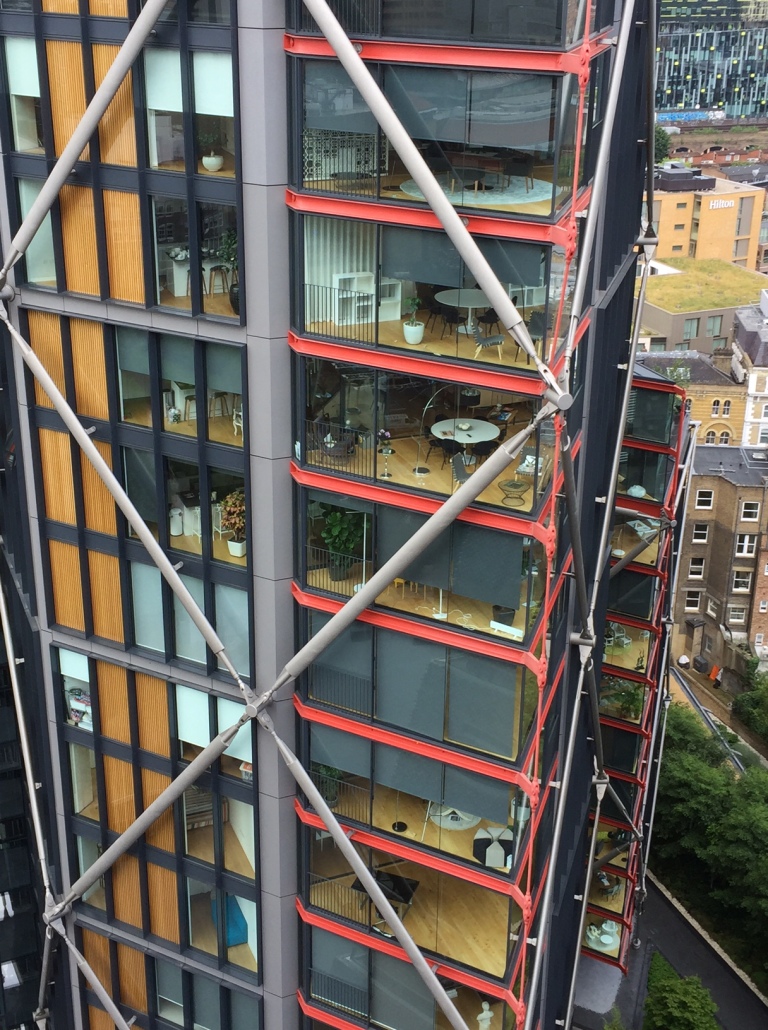 But by some miracle of circumstance and patronage Herzog and de Meuron have created a public building that is both fitting to the radical art that it might house and suggestive of a civic spatiality that is not the result of  a simplistic formula of the neoliberal palaces. There are no sunfilled spaces, open planned white minimalism with a bit of glazing desperately trying to frame or invent a serene view. Of course, the bankers and the celebrity politicians have no need for the poetics of the grotesque and estrangement which underpins so much radical art. The new extension is great because it suggests that for some at least, the techniques related to the grotesque and estrangement, and indeed architecture itself still matters.