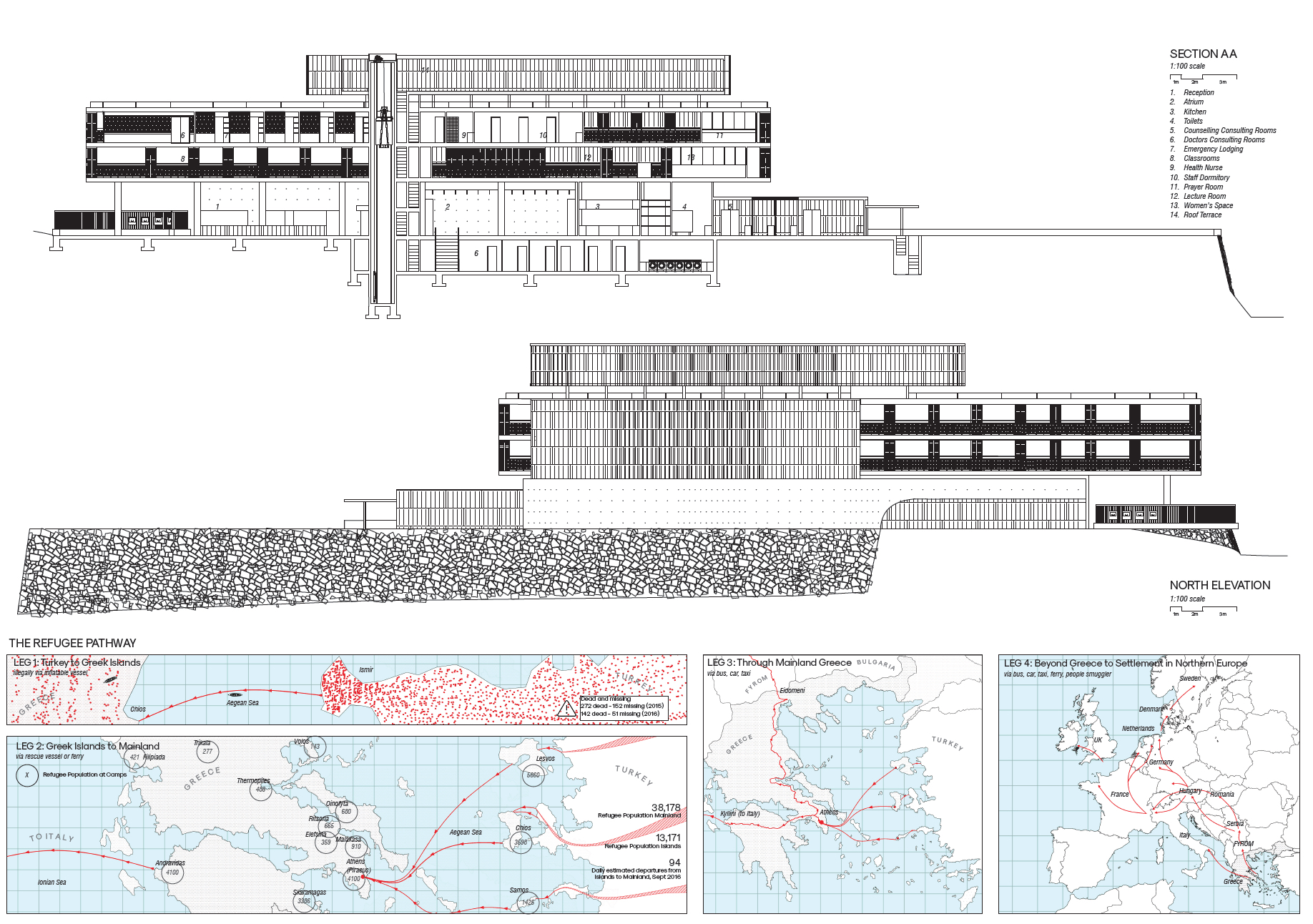 Daphnes Spanos Autonomous Waypoint project (above) from Independent Thesis MSD 2016. Rehabilitaing and old modernist resort hotel, this project grappled with the flow of refugees to Greece and Europe from Syria. Numerous critics were aghast that she was even trying to do this. One critic thought she was doing a Manus island detention camp, another couldn’t believe she was doing it at all. I was aghast at the emotional reactions to this admirable and well thought through project that sought to tackle a seemingly dangerous issue.

Memories of the old school

Recently, I returned to my architecture school of my architectural birth to look at the final year projects. It reminded me that my architectural education was largely a mix of being self-taught and learning a few things in the actual classes, being bullied by tutors, and stumbling from one design studio disaster to the next. Ironically, even though I now teach it, professional practice was not my best subject, whereas architectural theory was.

I should also add at the time the principal mode of studio criticism seemed to be good-cop bad-cop combined with a large measure of passive aggression. I didn’t talk, but I did observe. Luckily for me one of my design tutors had a, seemingly dangerous, passion for Christ. It was great education to see over the years how that dangerous and unconventional passion manifested itself in a subsequent career and built works.

It’s also best, if I skip over and dont mention, my not so fabulous design marks. Needless to say, I have always been suspicious of people who got the top marks in design. Unless, of course they were in my studio or my own thesis students. Two of which are featured here to illustrate my points.

I think one of the most important things I learnt at architecture school was that architecture needs to be dangerous. I remembered this when I saw the final year projects on the walls of my old architecture school. Not all of these projects were vapidly pragmatic or useful. In almost every one there was a sense of danger, a sense that architecture itself mattered more than logical design thought and functional solutions and techniques. More than a sense of concise, orthodox and well expressed arguments. It reminded me that architecture can still provoke ideas through spatial experience, the way we make sense of the world, questioning aesthetic norms, as well as allowing us to pursue techniques to there most extreme, and often surreal, conclusion. A sense that architecture was about estrangement, evoking worlds, states of being, and memory that exists outside of and in parallel with our everyday lives. Of course, to complicate matters further, and this may come as a shock to some readers, architecture doesn’t always need to be about anything all the time anyway.

Once you get past the naïve swamplands of thinking that architectural design is all about designing solutions to problems it gets more interesting and paradoxically, I think, architecture also becomes more effective. Last year in a design crit I heard a jury member say: I don’t like those materials and the way the project has been drawn it looks “hard and impersonal and repetitive” and hence the implication was that the project itself was hard and maybe should it have been soft? I wonder, what it is with the hard-soft dichotomy anyway, the more I think about that the weirder it gets. Our level of critical discourse and criticism needs to rise above this kind of simplistic determinism and crap dichotomies.

Above and Below: Priscilla Kwok’s Independent Thesis MSD 2016 drew on the polemic of Superstudio and critiqued the all male culture of innovation spaces. The project was a poetic and thorough critique of current fashions and exclusion in workplace design.

What should be of concern is that the problem solving ethic, often ignores aesthetics and does little to produce architecture that either provokes our thought or speculates about the future. Even the smallest and most budget restrained project can speculate and provoke us to think.  Being self-satisfied with the baby pap mix of concepts based on simplistic functionality, constructional CNC logic or another “bespoke” policy issue, or social enterprise do-gooding is not enough.

The “urban happiness” push is fine but is it just about making the already privileged comfortable in consciousness and urban lifestyle?  Is it just about trying to organise and mitigate the horrors of neoliberal capitalism: sustainability, green innovation (another apartment building covered in green) and clients with that “awesome” lifestyle. Making the deterministic and causal link between material aesthetics and how a building feels only diminishes our design practice.

So along these lines what follows are no less than six talking points, to help you think about how to make architecture a little more dangerous, and even fun. Plus, I have included a few images of “dangerous” final year projects.

Yes, there are times architects are so caught up in solving immediate design problems for the instantaneous moment that they disregard forget how to create problems. Have architects become too risk averse? Of course, I don’t mean deliberately creating problems related to some technical lack. Like the roof leaks or bits of the building fall down. Creating speculative problems is about the long game; the real game after the project is delivered. For example, architects can choose to design to disrupt. To disturb or distort prevailing urban aesthetic, sustainable or material patterns and orthodoxies. Just doing sustainability isn’t really enough. I hate it when developers get their green on. 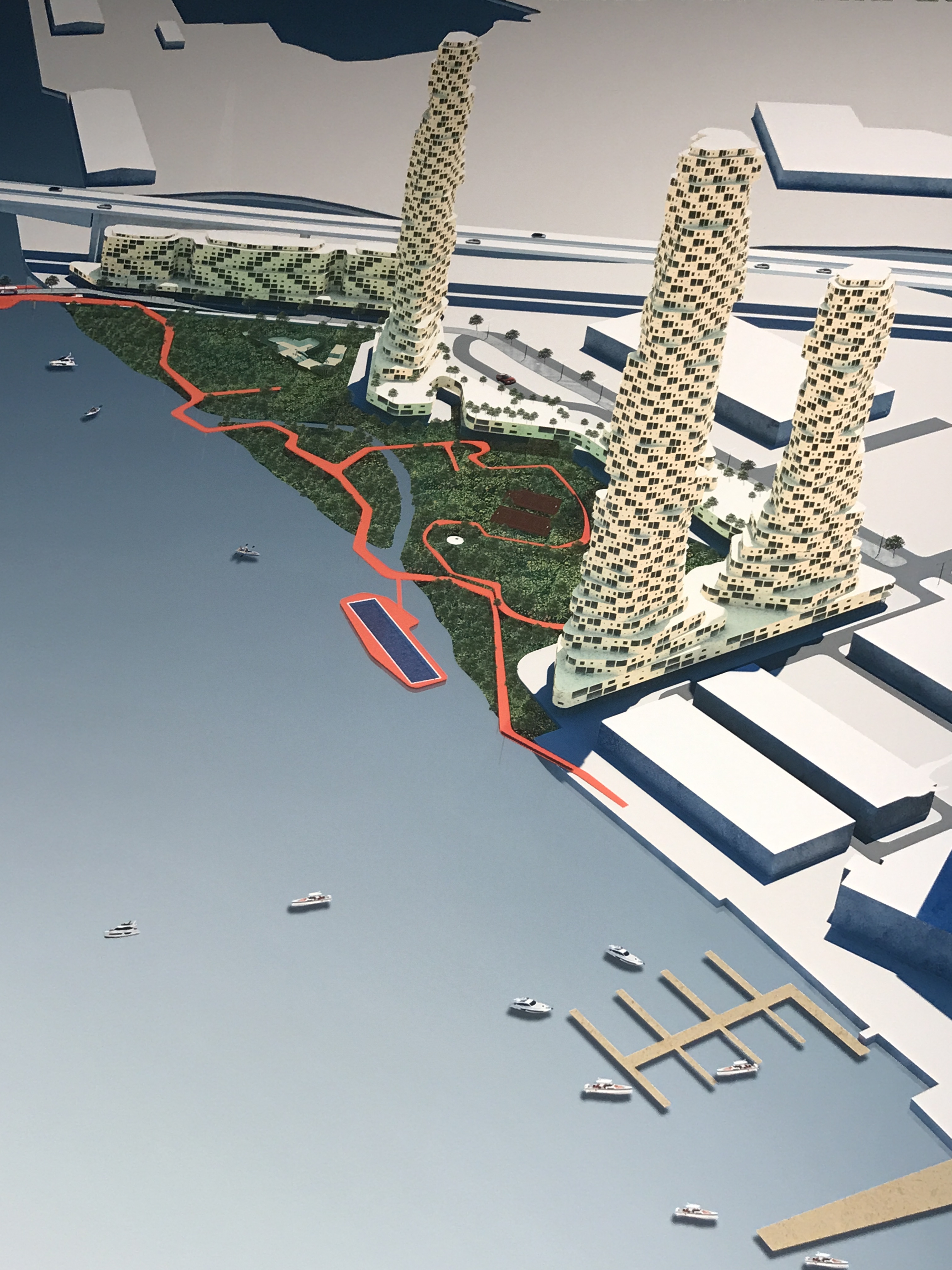 2. Create architectural images that burn a hole in your brain

Create dangerous architectural images (and I don’t mean pornography). I dislike images that are full of sanitised clarity or have been over saturated with “realistic” colours or filled with bright happy Google people. Create, fuzzy and blurry images, ambiguous images, images that play with perception, images that obscure and confuse us and play with existing regimes of power and media distribution. I am sick of seeing that archetypal housey thing covered in black zinc in my social media feeds.

In what way does the design subvert or counter a client context, prevailing typology, or economic situation. We need more projects that speak to refugees, migrant labour, gender inequality and LGBTQIA and indigenous people. We need more projects that reference the political contexts that confront us and it is architects who have the spatial, form-making and material tactics to do this. I am not sure the community pop-up barista café design market urban garden is really that political. Sorry.

Architects can really foster debates about the future of our cities and architecture and I don’t just mean debates around making those cites nice, or “great”, or high density or more liveable. Or another thought leader convention full of urban densifiers and city exciters. Architects can also propose experimental futures. Architects can and should have a real discourse around utopia and dystopian outcomes for our cities. I am not sure those renders of endlessy flooded cites, or cities full of windturbines, will do that either. 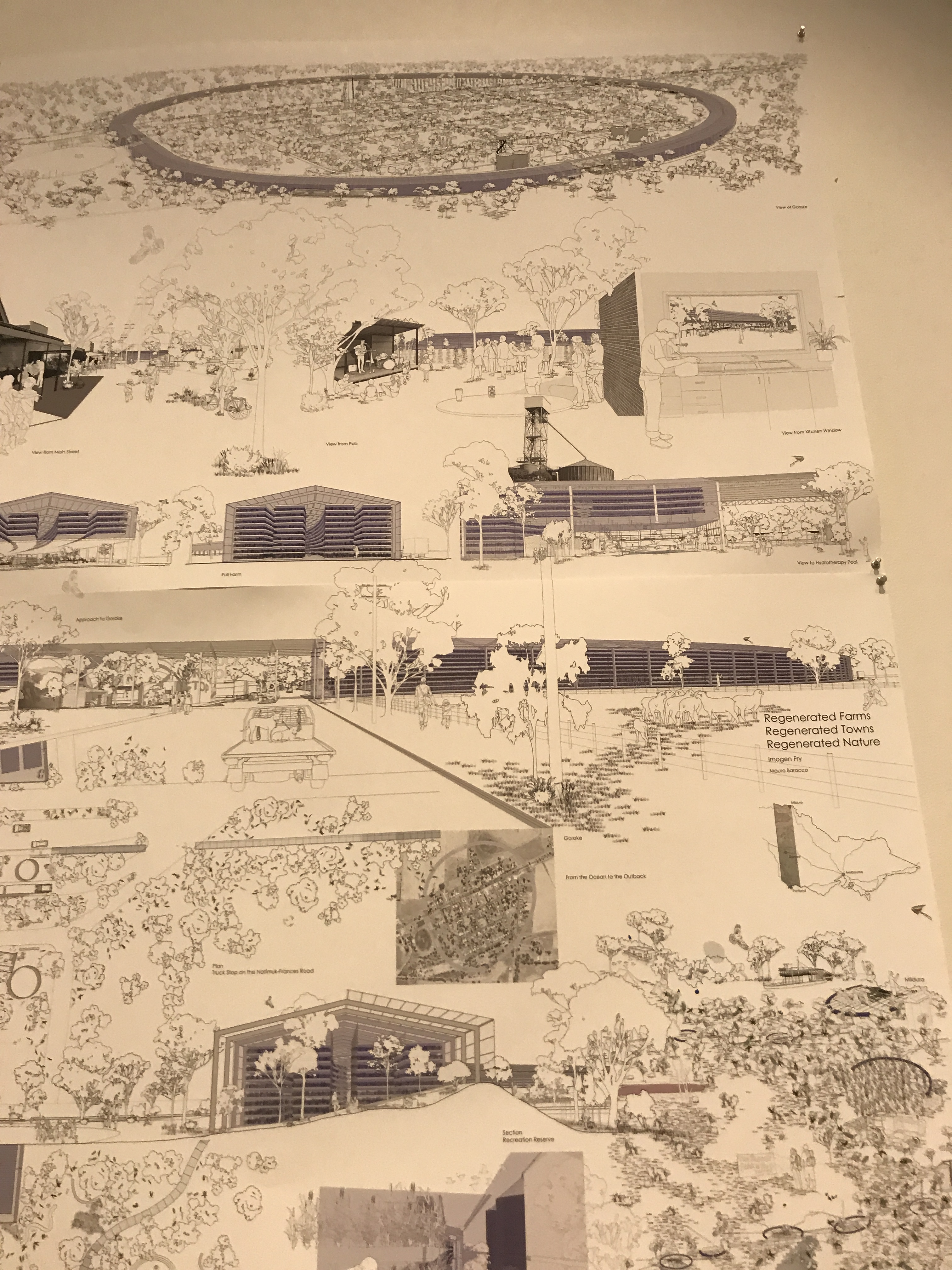 5. Architecture should be kind of annoying 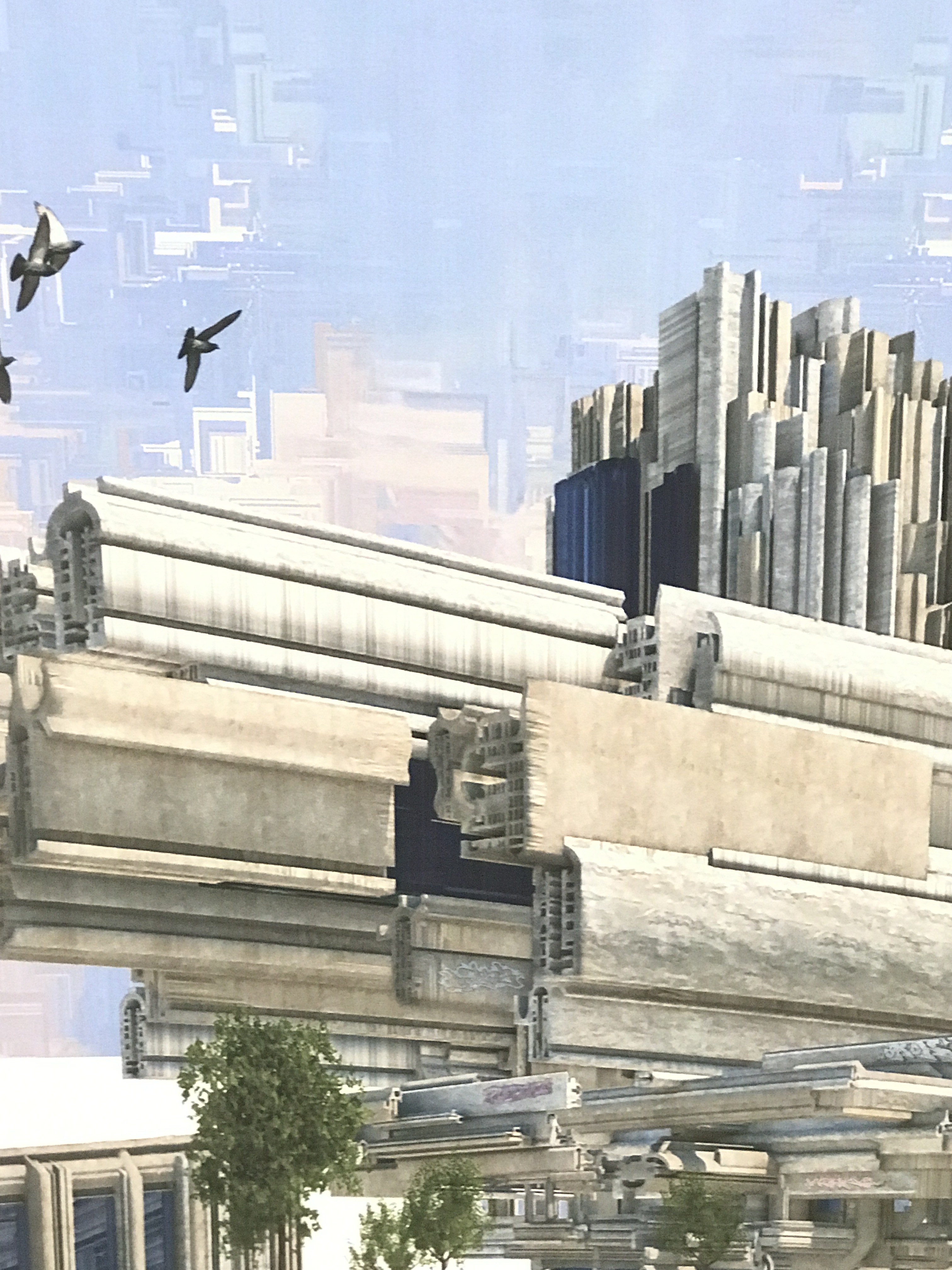 Is architecture just about giving the everyday users, or punters, what they want? Maybe people need to bump into architecture more, maybe it needs to be in their faces more, maybe it needs to make them walk through a labyrinth or see different aspects of light than the monochromatic fluorescent and halogen wash we are all living in. Architects should avoid, like the plague, that happy little bright and sunny sustainable community focused apartment development with all the big floor to ceiling windows looking onto the garden.

In decrying these things I am not wanting to evoke a sentiment of cynicism or bitterness. The tone is probably meant to express a kind of desperation in order to save the discipline of architecture. The images of the final year projects reproduced here suggest a little about my position. I am not suggesting that architects should escape the world and outcast themselves into a zone of isolated hypocrisy or pernury. I am not forgetting architects need to get the fees in. But, intellectual appeasement to the prevailing norms, fashions or about to happen policy problems is not architecture. Nice and safe is not architecture. It only leads to an architecture easily swallowed up by the mass produced business as usual landscape.

We need more ugliness and danger in our aesthetic and critical practice. Maybe naïve art and kitsch is pretty good after all and thankfully the architecture schools are still places where we can experiment. Architecture needs to take us, and be, somewhere else from where we are now. Playing it safe is not going to do that.