Having time away from home often helps one to see things in a new light. The grind of normal routine falls away and more reflective demeanour takes its place. For the academic such reflection helps to fuel ideas and suggest further things that can be written about in venues such as this. Hence, I am a bit later in doing this weekly post.

In my city the media in certain instances has all too easily attacked large infrastructure projects and urban design projects. Federation Square in Melbourne and also Southern Cross Station have both been the victim of campaigns that have sought to know better than the architects who have designed these projects. Federation square is now one of the most successful urban and public spaces in Australia. Southern Cross Station works pretty well. However at the time of their design and construction they were excoriated in the tabloid media.

As I tell the practice students it’s always easy to blame the bloody architect.

Maybe this is why sentiments against architectural expertise, opinion and knowledge are easy to drum up in the tabloid media. Sometimes these sentiments are used to promote inappropriate development as much as they are used to attack fine architecture. A case in point is the design of the Crown Resorts Barangaroo tower development in Sydney which in many ways exemplifies the relationship of architecture to the mainstream media.  Arguably, this tower, and I am loathe to condemn something until it is actually built, represents the whole catastrophe and horror of the current state of public procurement in Australian cities.

The whole saga of Barangaroo started in 2003 and in 2005 an international urban design competition was won by Hills Thalis with a winning concept plan that divide the site up in a way that would, in theory at least, encourage diversity of development. As set out in this  article by my colleague at MSD Dr. Jillian Walliss the concept of the original competition entry for the headland park has been butchered. The Lend Lease development along and behind this headland park has, as documented by numerous critics, been a site of controversy and debate since at least 2010 as exemplified in this article by Elizabeth Farrelly. 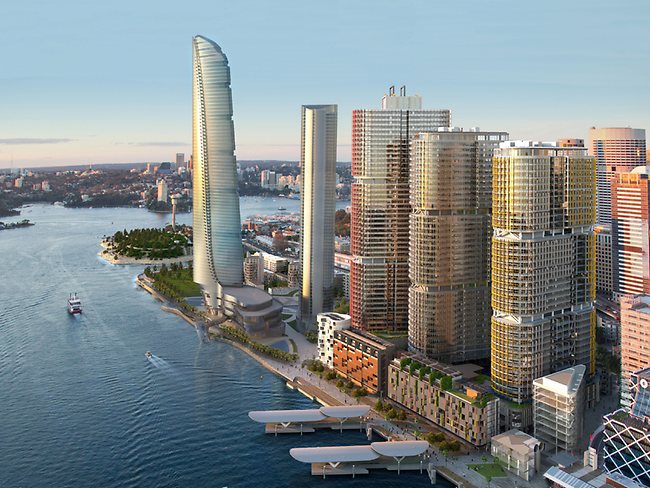 The current design for the Barangaroo tower has been supported by an adhoc alliance of the media, developer, gambling interests and no less a personage than the former prime minster Paul Keating. In the past Keating has been a friend of architecture supporting projects such as Federation Square and providing AusAid money to help plan and maintain the heritage of values as old Hanoi. Noble stuff. How an acolyte of the hard old men of the Labour Party such as Jack Lang and Rex Conner became an aesthete I have no idea. But, I do know that politicians, no matter how esteemed, should be wary of employing their dark arts in a fluid and as a contestable territory as architecture.

There is not a lot that can be said about the “pinnacle tower” in the quay  designed by the English firm Wilkinson Eyre (a firm with 9 male directors). Maybe this is why the tower is the worst kind of big dick sculptural architecture you can imagine. Reportedly, the new tower was described by Keating as Constantin Brancusi’s sculpture Bird in Space (L’Oiseau dans l’espace) created in 1923.

The concept takes its inspiration from nature, composed of an elegant, curved geometry. The tower’s form emanates from three petals that twist and rise together, and its sculptural shape maximises the opportunity for accommodation to make the most of the views of Sydney’s famous bridge and harbour.

A sketch of the the curtain wall facade of the tower adorns the cover of a book of Chris Wilkinson’s recently published sketchbooks. In the sketchbooks the conceptual and annotated sketches for the tower suggest a concept around the idea of petals. It’s the whole catastrophe of making architecture seemingly natural and organic: “sculptural forms”, “leaves and petals”, “spiral geometry” which is all meant to contrast with the towers oh so boring and ugly “rectangular surroundings.” I am not sure if Sydney and its waterfront edge was ever that rectangular.

Stab me in the eye with a biro mate; the crude simplicity and the final form of this concept is astounding. This is nothing like the complex initial sketches of Utzon’s Opera house with it’s shifting and ambiguous shells and its podium related to Chinese temple architecture. Utzon’s original sketches are more frenetic, chaotic and ambiguous. This is part of their power and this is perhaps why Utzon got into trouble with the parochial naysayers and bean counters of the time as he developed them into architecture.

A sketch is something you work from towards a constructed and designed reality. Modernist superstars such as Le Corbusier, Kahn and Mies Van der Rohe all understood this. The Portuguese architect Alvaro Siza understands this. Frank Gehry understands this. A sketch is not something that should be oh-so-easily translated to the digital and parametric realm as the case with the Barangaroo tower. Sadly, many of Wilkinson’s public sketches are like this. There is no sense of searching for any emergent ideas in these sketches. They are overdetermined and over annotated attempts to depict and translate an idea to a final reality rather than exploring that reality. You end up asking if these sketches represent architecture or are they more about industrial design? They seem to be all about control of the final product. Product being the operative word in this equation.

Whilst on holiday, as the revelations about the torture of indigenous children in the NT came out, I was reading Xavier Herbert’s Poor Fellow My Country. It won the Miles Franklin award in 1975 and was reprinted in a new edition in to celebrate the 40th anniversary of its publication. In part the novel inspired Baz Luhrman’s unfortunate film Australia. Intensely anti-colonial and anti-British the novel depicts Australia as a community of kowtowers, thieves, drunks, and lousy bastards. I suppose a lack of generosity has always been a theme in Australian public life and in the design of our cities. At Barangaroo the transfer of public land to private interests and the tower development seems to exemplify these underlying cultural torrents. We deserve more than billion dollar developments built on a couple of quick sketches. I think the original Cammeraygal inhabitants of these harbour headlands certainly deserve more as well.