Architects are a contradictory profession. Prone to political activism and yet also deeply conservative. Seemingly agile, radical and innovative yet unable to move quickly in the face of gender inequality in the profession. Forward thinking and future driven yet bound by the traditions of the canon.

But if there is one thing I think many architects in my small global city of 4 million people can agree on it is this: Statutory Urban Planners are the lowest form of life.

I am not the only one in Australia to actually think this. A recent article by Elizabeth Farrelly in the SMH also points to the crisis in the planning profession in Sydney. However, I think many of Farrelly’s observations may also apply to Melbourne. The only problem is the planners themselves are not aware of the crisis. Architects, to their credit, on the other hand always seem conflicted by professional guilt and riven by internal debates of one kind or another.

Don’t get me wrong. I am a big fan of urban planning and its associated discourse. I was in partnership with a planner who also did architecture. But, many small architectural practitioners I know are angry. They are angry about the idiocy of a planning system that permits the wholesale destruction of our cities fabric and memory and yet binds up small projects in the most torturous regulations and processes.

From the perspective of many architects in Melbourne planning governance is broken and this impedes the governance and development of the city. It is an anarchic system.

Lesson 1: The built environment would be better if planners actually learnt about architectural and urban design

In 2011 we organised a protest against the unsanctimonious and ill considered renovation of a so-called brutalist building. One of the most important examples of this movement from the 70s.   You can read about it here. As a result of our protest, the council undertook to renovate an important element of that building. It is still yet to be refurbished. Despite a heritage assessment report and its significance the planners at the council in question said and did nothing.

Clearly in this instance the planners had no sense of responsibility to or appreciation of Australian modernist architecture.

Perhaps the study of Australian architectural history should be mandatory for statutory planners. The curriculum of most planning courses have a kind of pseudo legal aspect to them. This is matched with a altruistic, if not condescending, interest in community participation. Chuck a bit of sustainability into the syllabus and what more could you want? How about planners study architectural history, visual arts or urban design as a core component of their tertiary courses. How about planners learn about design, design research rather than exclusively focusing on social science research?

Lesson 2:  Planners will tie you up in processes that are disproportionate to the size of the project at hand

In the process of doing an internal renovation of a commercially zoned building in a middle ring suburb the building surveyor insisted an external facing shutter be removed and replaced with a gate in order to facilitate emergency egress. Makes sense doesn’t it ? Sure, it makes sense but not to the planners. They insisted that the new gate be subject to a planning permit including advertising. Maybe 3 months, maybe 6 months maybe a year to get through this process if you are lucky. Providing no one objects during the advertising period. But, maybe someone will object and you will go to VCAT. Of course if any one objects the planners will agree with them.

The architect friend of mine responsible for this project bemoans the fact that, a junior planner is employed at the council on the project and is just following the rules; that way they don’t have to think. She says, perhaps with the benefit of prior experience,  if you complain the planners put you at the bottom of the list and go slow.

Planners are not independent, mostly they are employees of councils, who will simply follow the dictates of their line managers in their organisation.

I am keen to document examples of situations where architects have been bogged down in planning red tape on small inner city projects. Send them to me and I will de-identify these cases and then discuss them in a later blog ! Email me if you are interested.

Lesson 3: Planners have no control or interest in questioning large scale developments

One of of the last remaining buildings associated with the coach industry. Who cares ??? Not the planners. This facade is about to be completely demolished for a, perhaps tawdry, laneway and curtain wall. Maybe the laneway will have a barista outpost in it.

The upshot is almost nothing is actually governed by the planners. Small projects get locked up in red tape and as Elizabeth Farrelly points out the interests of big developers remain paramount.

So what’s worse than the planners not planning or not governing the planning system? It is when the planners actually start to see things in the urban environment; or think they actually know about design. Planners love to add design value. But they often get this wrong. Why is that? Urban Planners are not trained in visual or spatial thinking. Sure they can argue and talk about the politics of community participation and the rights to the city. But they by and large have no idea about urban aesthetics, architectural value, or design processes. Their understanding of the issues is extremely simplistic.  Consequently,  since the demise of high modernism and the birth of the building conservation and renovation movement in the 1970s our city is littered with the most simplistic and naive examples of facadism. Rohan Story has all done us a favour by documenting many of these as a part of Melbourne Heritage Action group (thanks to MHA for the images in this blog).

You can always tell when the stat planners have a had a go at a building in the planning process. They love to tweak a corner or add a bit of value to a streetscape. They are excellent mimics especially when it comes to imitating, the facades of Victorian and Edwardian housing stock. Their favourite delight is slapping on the heritage colours out of the paint bucket. Fragmented and “broken down” facades, setbacks on setbacks, screening in myriad materials, different materials and colours; beige, pink, rust and that beloved of all colours for the planner wanting to evoke Melbourne’s historic past: terracotta. Oh, and I forgot to mention that the planners love a balcony.

These pathetic efforts are usually touted as a win-win and as a result our city is full of the results of this kind of urban streetscape slop.

In reply to Farrelly’s article the PIA the Planning Institute of Australia responded by stating:

Planning policy provides the checks and balances to put the densities where they best fit and ensure infrastructure is appropriate. There will always be differing public, professional and political opinions and reactions to any rapidly changing city.

Planning is inherently focused on facilitation and balance where both the public and many differing private interests are accommodated. This should occur without compromising good design, creation of place, amenity and liveability – this is known as the public interest.

As far as I can tell urban planners in Melbourne are powerless and do none of the above. The planners are always good at writing stuff to make it sound nice.  After all that is what they are trained to do. But they need to be visually and spatially literate.

Yes, some of my best friends are planners, many of my more admirably and politically orientated colleagues are planners, but I am sorry we really need to have this debate.

What rankles is how easily the punters find it in themselves to hate architects. In actual fact it is the urban planners the punters should be hating. Yes, architects are kinda guilty as well. Both professions are involved in and witness to the current and ongoing contemporary destruction of Melbourne.

But at least the architects as a profession will argue about it and lose sleep over it. Which is more than I can say for the urban planners. 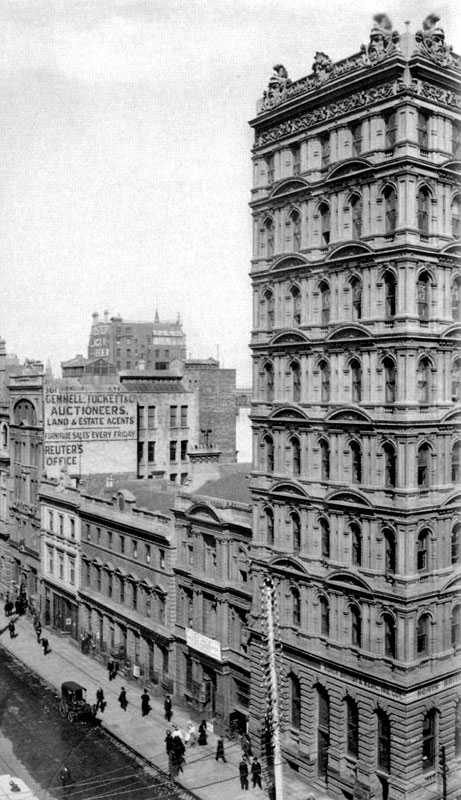