This last week or so at my graduate school of architecture the students were lining up for selfies with Bjarke when he came as a part of the Beulah International competition. It was quite a commotion. Initially, I wanted to puke, there was a lot of black, and I mean a lot. Black tees, black jackets and black horn-rimmed glasses. Everyone looked liked gangsters on a Eurovision set. Most people who read this blog know how jealous I am of Bjarke’s hairstyle.

After my initial revulsion, I calmed down and realised that Bjarke was here for the Beulah International competition to design a mixed-use high rise complex on Southbank in my City of Melbourne. For Beulah quite a few of the local firms got together with the stars.

In December the South Australian government announced the shortlist for the Adelaide Contemporary Art gallery. This list was as follows:

Firstly, I will try and avoid a rant about how much I hate the star system and the paucity of risk-taking on the part of our institutional decision makers. Yes, it was great to see some emerging practices and voices in the Adelaide lineups and a focus on indigenous narratives for some of these teams. As time goes on, I think this focus will increasingly have to be a consideration for public commissions. But what does the overall inclusion of so many stars say about architecture in Australia? Have we lost our nerve?

In strategic terms what do these collaborations say about global competition, competitive advantage and the branding of architects in Australia and Australian architecture as a brand across the globe.

What struck me was that there is no single stand-alone Australian architect in this bunch. In both of these competitions, the short-listed firms are Australian architects aligned with the so-called star architects. Now far be it for me to preach some kind of little Aussie battler nationalist bias. But it is nonetheless vital to ask a few more questions about this situation:

As a strategy is it wise for local architectural firms in Australia to collaborate with these so-called stars architects? The old aphorism is that the local partner brings along well needed local expertise and on the ground knowledge. In other words, the international star designs and the local, seemingly domestic, partner implements.

Are Australian architects the documentation drudges of the global system? In these competitions have the Australian firms, in these collaborations, become global lackeys. The so-called second rate “drafties” of the global system? But is it really as simple as this? And in an increasingly media driven international marketplace for architectural services perhaps this strategic rationale is only partially valid.

In this context, one could argue that the Australian firms might provide the local technical grunt. This is in line with the overall trend towards the global outsourcing of documentation services. Across the global system, privatisation policies, and shareholder value practices have led to a situation where there has been a rise in outsourcing for architectural and building documentation.

The rise of digital technologies and the labour rates in the so-called global south have led to an increase in digital outsourcing for documentation. The late Bharat Dave in his own work noted the rise of offshoring architectural services which began in the late 90. Outsourcing has coalesced in places where there is an ICT infrastructure aligned with skilled workforces and low labour costs. Dave noted in 2010 a situation, that is now commonplace, where designs in one country are modelled in another, documented in yet another and then fabricated in another. It is not hard to concur with his conclusion that this situation necessitates the need for the “reconfiguration of practice in the long term.” ⁠

This situation has only accelerated in recent years, and it is perhaps naïve to think that the reconfiguration of practice is solely about the outsourcing and subsequent commodification of the services, such as technical documentation that designers seem to loathe in the first place.

The problem with partial services

In these matchups, local architectural firms ruled by economic survival might find some comfort in being more easily able to modify the range of services they provide; being able to provide the technical grunt. Yet this flexibility poses a dilemma: to be more profitable, these firms need to offer a complete range of services. But as a result of changes in technology, partial services are less profitable and also readily supplied by non-architectural competitors. Consequently, many middle-ranking and larger firms have no choice but to provide limited or partial services despite the fact that this only encourages, and leads to, further disintermediation, and commodification in their markets. Providing partial services may be unsustainable in the longer term. For the local collaborating firms it might be a vicious cycle.

There is another issue that these two competitions point to, and that is the role of the internet and media to shape perceptions and the branding of architects. The following strategy diagrams map media impacts of the collaborations in these two competitions. I charted media hits (as measured by Google) of the stars against the reach of the local firms (number of Australian plus Internationaloffices of the local partner). I will let you make your own analysis of what all this means. My take is that clearly for some offices the match-ups appear to be ad-hoc and without any strategic intent. For other practices, the diagram shows who might gain or lose from the collaboration.

Clearly, it also suggests who might win these competitions if this was the only criteria. It also shows which local firms may be using the collaboration to either extend their range or extend their brand by being attached to a star architect. 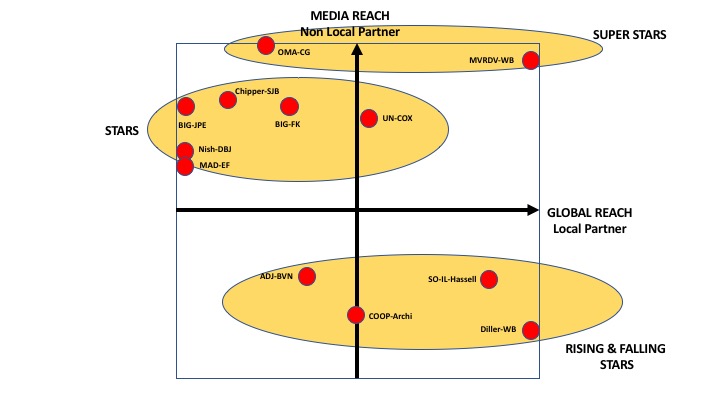 For many Australian architects or any firm on the periphery of the global media starchitect system, such collaborations are perhaps necessary.  Since the early 2000s if not before, architects are no longer grounded in a particular office or geographical location. Competition amongst architects is global in the intense global competition for architectural services, arguably Australian firms need to extract value from networks and systems of patronage no matter how distant they may be. The star architects are better able to do this because they operate from larger economic centres.

In any case, this all points to the ongoing commodification of design services. Perhaps the local/star matchups, point to the dumbing down of design into seductively drawn products with market signals that scream out “star-designer.” This is regardless of the fact that these designer products, seem to retain a threadbare relationship to what might have formerly been regarded as a traditional design process. Many of these designer products, indicate no interest in the memory of city or any sense of freedom and politics to be found in local communities.

Taken together, Australian firms need a renewed emphasis on strategic thinking, better management, a recognition of the media landscape, and internal research to gain competitive advantage. Otherwise, Australian firms will be doomed to be secondary actors, and lackeys, swilling around in the global system of architecture.